About Battle Bonds of Gor, a gorgeous nightmare of Valkyrie Panthers

Bond maidens an alternative to kajiras 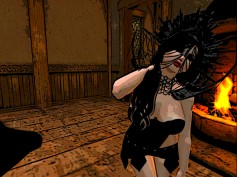 The battle bonds, a gorgeous nightmare of  Valkyrie Panthers ….but Who are they? How do they fight? How do they dress?

Bonds are not soft silkies and only kneel when working or told to. They know when and how to speak and interact. Bonds often sit on benches in the hall at their Jarl’s side or in his lap. Bonds listen and enjoy merryment and stories of all sorts. They rarely treat thralls harshly or with disdain, to do so is to risk being given to the thrall’s hands for a time by her Jarl. Bonds are outgoing and lustful and do not sit idle waiting to be needed or wanted, they use their charms and curves to make themselves needed and wanted then work hard to ensure their Jarl is pleased.

So as we begin this class we must pause and wonder what is the most important information that both free and slaves need to know. Certainly bond maids and thralls want to know how they should act, what they should do, how they should speak. But this class is written for everyone who is interested in becoming educated on Torvaldsland. We have a three or four part class specifically dedicated to the education of bond maids. In this class we are going to do our best to give a broad overview.

One of the first things that I want everyone to understand is the vast differences between bond maids and silk girls of the South, and between thralls and male slaves in the South. The most common perception of Southern slaves is the pleasure slave. Very few slaves in southern Gor role-play as kettle slaves or tower slaves, or even coin slots. Therefore the most common comparison between bond maids and Southern slaves is to that of the southern pleasure slave. From the point of view of a bond maid, a silk girl wore a pierced ear girl is that the southern pleasure slave is little more than a pampered toy dog sitting on a gilded pillow. Obviously from the point of view of a southern pleasure slave bond maids are little more than farm girls, and are interestingly enough called “high farm girls” as an insult.

Most man in Torvaldsland are free farmer’s. However, we understand From Marauders of Gor, that primarily bond maids were owned by men of rank, what were called High Men, such as Jarls, captains, chieftains, minor Jarls and officers. We are given the impression, that very few free farmer’s owned slaves. However, even High Men, owned or managed farms, villages, or camps.

What is the primary responsibility of the bond maid? To work. To churn butter, to bake bread, to roast meats, to dung fields, herd verr, and to serve in the Hall. If the free woman of Torvaldsland is rarely more than a farmer’s daughter the bond maid, is in essence little more than a farm slave. While this may sound, at least initially, vastly unappealing, it is as rewarding and this freeing to the slave as it is to the free woman. Overt southern expectations of behavior do not exist in Torvaldsland. There is not 1001 ways to enter a tavern in Torvaldsland, not to mention, we don’t really have taverns anyway. Bond maids are not expected to kneel and beg for permission to pass every time they come on a free. Bond maids do not kneel to serve. Bond maids do not need to ask permission to greet, even if in the middle of the serve. Bond maids are not taught overt ritualized behavior.

I have been asked what is the by the book way for a bond maid to serve mead to a Jarl. In the books, a bond maid simply fetched a horn or pitcher of Mead and gave it to the free man. There was no horn kissing, begging permission, or even hopes they enjoyed it, going on in marauders. In addition, it should be noted that the term “lap serve”, was not used in marauders either. It is this that I fear that has caused some of the confusion. That by formalizing the action of a bond maid to try and get into the lap of a man into a term called a lap serve, simply reinforces southern ritual. In marauders a bond maid got into the lap of a Jarl, by wiggling her happy little ass onto the man’s lap, or by being dragged onto his lap. The “lap serve”, was no more and no less than this.

So what is this freedom bring the Torvaldsland bond maid? In a word, exactly that … Freedom. The bond maid is free to run, laugh, squeal, beg, and completely express her joy. Even free women who become bond maids quickly appreciate the delight of their existence. Just stop and think about it for a minute, as a bond maid, your life involves hard work, and the simple pleasing a free man who want nothing more than to fuck you on a table or in the furs. You are bound by no other restriction been should be a joy to those around you, not to mention mind blowing sex.

Most people when they begin a class on bond maids wish to focus on how they dress, what chores they performed, how they were collared and other aspects that are primarily focused on the outward not the inward. However, I feel the single most important thing for any role player, and certainly one who is coming from southern Gor, to understand is the personality of the bond maid.

So while we will moment discuss kirtles, collars, thralls and chores, I want to take a little bit more time to give you the personality profile of a bond maid. The first bond maids we see in marauders are not the free women captured in Kassau, they are instead the bond maids of Forkbeard who upon his arrival at his home rush down the steep hills towards his boat. They laughingly and happily press themselves against him, begging for kisses, asking who is favorite is, asking if he missed them and throughout all of this, Forkbeard and his men are laughing, sharing ale, and enjoying the spontaneous nature of their slaves.

Forkbeard then sends his bond maids off to prepare a feast. They don’t beg for permission to leave, take three steps backwards and only then turn to walk sedately to the long Hall. No, they turn, and running and laughing rush to the long Hall begin a feast. When the feast is served, They strut around the Hall carrying huge trays of roasted meat, as the men shout for Mead, ale and yes I think will be edible left her the from last night okay. To which they respond quickly, carrying pitchers, horns and trays. Bond maids are grabbed maids serve, dragged into lapse, kissed and ravished as the men, laughing, look on. The men in the Hall don’t get their knickers in a twist, because some other man in the Hall grabbed the bond maid who was on their way to serving him.

The next bond maid lounges in Forkbeard’s lap, being fed bits of meat from his plate, her bare breasts shining in the firelight, is another bond maid brings him more Mead. And the third, her eye on some man she likes, brings him Mead trying to wiggle her happy little ass into his lap. The only formality in this hall is how fast you can serve the Mead and get ravished.

Bond maids in marauders wore garments called kirtles. Unlike the examples of kirtles in second life the traditional kirtle was a loose, ankle-length, longsleeved, high necked dress much like a shift. Both bond maids and free women wore kirtles. Kirtles are the traditional undergarment of Norse women. Bond maids wore their kirtles split down to their belly, and often hitched up high on their hips. The traditional kirtle is not a tightfitting, sleeveless garment, with fabric strips in the front and back.

If a kirtle was sleeveless it was because the sleeves had been removed, not because it was made to look like a tank top. Second Life vendors, mimic the high on the hips walk of kirtles by using panels of flexi prims in the front and back. However, it is more likely, that the garment would have sat around your hips in a bunch, more like that of the can can girl. The kirtle would sit loose around your waist, with easy access for probing hands to grab a breast, or encircle your waist. The top of the kirtle would likely slide off your shoulders easily, and may have had a bit of rope, tied around the waist.

The collar of bond maids was not closed by a lock. Instead, the bond maid collar was a simple heavy iron collar, that was riveted closed on an anvil with a hammer by a blacksmith, or a man with this skill to do this. Torvaldsland does not follow slaver caste brands, instead the brands you used are ones that have become popular by tradition. One of the most common brands is a simple horizontal curve with a diagonal line over it, this brand stands for “a woman whose belly lies under the sword”. Brands in Torvaldsland are applied two Gorean seconds longer than brands in the South, approximately 5 Gorean seconds. Free women who become bond maids are typically collared and branded at the same time.

I hope this provides a clear instruction as to the role, demeanor, and look up the bond maid in Torvaldsland.